Whenever I travel, I´m always interested to know how much things cost and, every day, people from around the world find my blog by searching for the cost of living in Spain.

Back in August, I posted some receipts for groceries I had bought here in southern Spain, which proved to be a very popular article.

I also wanted to do something a bit different, so I decided that rather than post the prices of random items of shopping that you may, or may not be interested in, I would come up with a list of standard grocery items, which I will update the prices of, three or four times a year.   This list can easily be changed, so if there are any other basic items you would like me to include, please let me know in the comments section, below.  This way, if anyone else wants to do something similar, we can have a direct comparison between countries.

For this month´s prices, and to make direct comparison simple, I have once again used the Spanish Supermarket – Mercadona in Torrox Costa.

I must admit – I was pleased that I had noted down these prices in August, or otherwise I wouldn´t have known about the pleasant surprise awaiting me – THERE HAD BEEN NO PRICE INCREASES AT ALL, AND MANY OF THE ITEMS HAD ACTUALLY COME DOWN IN PRICE!  YAAY!

This was even more of a surprise as there was a hike in IVA/VAT tax rates at the beginning of September.  Whilst it´s fair to say that four of the price-reduced items are “seasonal fruit and veg” ,  six others are not, including a whopping 1.07 € off a packet of washing powder!

So, here´s the Standard Grocery List I used last time (with prices as they were in August) – now with November´s prices in RED alongside. 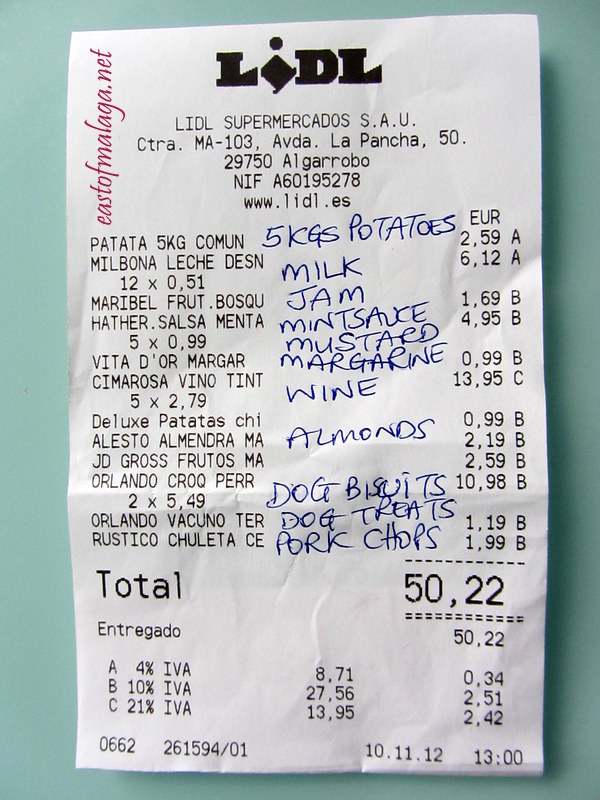 I´ve also included my store receipt for a few groceries I bought from the German supermarket Lidl which has stores throughout  Spain.  Most of these items not included on my standard grocery shopping list.

Gas:  We don´t have mains gas here – we use bottles of butane gas.   In August, a 12.5kg bottle of Butane gas cost 16.45 € – they are now 16.10 € .   One bottle used to last (on average) 21 days (for two people… though around 4 weeks in summer) for all hot water, showers and cooking.  During September we had a new gas water heater fitted and, even though it has a larger capacity for water heating than the previous one, it appears to use significantly less gas.  It´s early days yet, but the first bottle lasted five weeks (rather than three weeks).  I´ll keep my eye on how that goes.

Electricity:  Last time I told you that for a 3 bedroom/2 bathroom detached house in the countryside with a swimming pool, we paid an average of 90 € per month.  I may have underestimated this a bit.  The cost of consumption for us is slightly lower in winter with heating/lighting, as opposed to air conditioning/lighting/swimming pool pump running for 8 hours a day, in the summer months.  Our electricity company Sevillana Endesa has raised their prices significantly recently and monthly bills now appear to be averaging 120€.

Water: We are not connected to mains water, so when we bought our house part of the purchase cost was for a share in a local water company.  We have a water deposit to store our house water.  Our water share gives us an allowance of up to 17,500 litres of water each week at reduced cost, after which the price rises steeply.  Needless to say, we don´t use this amount of water, even allowing for swimming pool top-ups and garden irrigation.  The water company, Patamalara, doesn´t always sent out their bills regularly and much of the cost appears to depend on the amount of repairs that have been undertaken on the system, but over the past twelve months our annual water bill has amounted to 92 €.

Internet:  29 € per month with unlimited downloads (within reason).  Speeds up to 3 Mbps

How do prices compare where you live?

Goats on the road: I kid you not 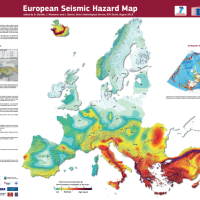